An accomplished master in the marriage of rhythm and flow, Chip-Fu is one of the few underground composers and performers dedicated to spreading the indubitable significance of Hip-Hop and Reggae music. "Those who listen to what's mainstream and call it Hip-Hop are sadly misled", the Brooklyn native once stated in an interview; "My objective is and always has been to abstain from cookie cutter material. The public needs something fresh, Organic & Real".

A universal storyteller and lyrical engineer, Chip's high mark does not revolve around creating a simple song. His primary ambition is to deliver an art piece that is then transformed into an audible experience for anyone who listens. As a result of this implemented philosophy, Chip-Fu has accomplished the meticulous feat of delivering flavorful, wisdom-laced messages without sacrificing a drop of authenticity.

Born Roderick Roachford by way of Trinidad, Barbados, Chip-Fu came to the realization that music was his destiny during the late 70's and early 80's absorbing Hip Hop and Reggae while stomping through the streets of Brooklyn. He took pride in the fact that his big brother kept him around to teach the ropes of the neighborhood at a very young age, and he was also determined to use the opportunity to his advantage. Furthermore, Chip couldn't have been in a better place at a better time in music history. Everybody kept talking about this new movement called Hip Hop and Chip happened to be right smack in the middle of its emergence; observing and absorbing it all. Little did he know back then, his own future would come to include being recognized as one of Hip-Hop's most active and creative participants.

At age 10 the brave hopeful managed to sneak into an underground sound clash party to prove his skills. As soon as it was discovered that he shouldn't have been there Chip opened his mouth, earned his keep and ignited an internal fire which sparked his very own definition of history. The fuel to the fire came from a member of the group UTFO (Untouchable Force Organization) who'd seen young Chip perform at a birthday party a few years later. The experienced emcee made it a point to give the bright West Indian dreamer props. "Keep it up, you're gonna do something with that gift one day." Chip recalls of the conversation, "I remember feeling like I could run the world ten times over after he told me that." Soon after UTFO released what would become their best known single "Roxanne, Roxanne" which is currently recognized as a Hip-Hop classic. Upon learning of the success of his impromptu mentor, Chip clutched his life-long dream under his wing, ran his hustle and never looked back.

To sharpen his wits, Chip began aligning himself with other like-minded individuals and professionals who shared his passion for music as an art form. This paved the way for his alliance with East Flatbush lyricists Joe and Lennox in the early 1990's, and together they formed the Hip-Hop trio "Fu-Schnickens". Throughout the group experience Chip continued to hone his skills as an artist and performer by learning the in's and outs of the music business. The group's pinnacle came with the release of "What's Up Doc? (Can We Rock)" in 1993 which featured basketball star Shaquille O'Neal and was named a Top 40 hit for the summer. However, after the release of their second album "Nervous Breakdown", Fu-Schnickens made the amicable decision to part ways in 1996 to pursue individual creative endeavors.

Branching out on his own, Chip Fu hit the pavement as himself vying for recognition as an independent artist who was capable of holding his own. It didn't take long for Chip to emerge on Nas's "Where Are They Now" remix, and making guest appearances on albums with Ali Shaheed Muhammad, Queen Latifah, Mint Condition and others. As time went on, Chip began to understand the importance of possessing ambidextrous ability if he wanted to maintain relevancy in the game. "I just wanted to achieve balance in my work," he says in discussion about his reasons for diverting more attention toward his own projects. Thus it was natural for Chip to create and release albums under his own record label and film production company appropriately coined BLAQ-INK, Inc. Through this endeavor the company released two albums as part of the "Stop Playing" mix tape series.

Although there were times where commitment to truth meant surviving the uphill trudge, Chip Fu's key strategy to remain true to the art of Hip-Hop allowed for his future to take care of itself. As if his popularity had not already reached its head, Chip found himself in even higher demand as a guest artist working with the likes of Pete Rock, Tiye Phoenix, Vinnie Pazz, Ali Shaheed (Tribe Called Quest, Lucy Pearl, D'Angelo), TheARE (Keyshia Cole, Lil' Kim), Needlez (50 Cent & Ludacris), S1 (Kanye West's Power), !LLMiND (Sean Price, 50 Cent), Apathy, Beatminerz (Black Moon, Boot Camp Clik), Vitamin D, Black Milk (Monch), Sean Price, and others. Chip Fu's contributions quickly garnered a loyal underground fan base. A group of followers who understood the value of his sound in a climate where music had become less than conducive to the survival of Hip-Hop's origins.

The BLAQ-INK label plans to continue their work in re-establishing the heart of American Hip-Hop and Reggae through the release of Chip Fu's forthcoming album "War Paint". The title is based on the idea that with anything in life you must fight for what you know to obtain what is rightfully yours. Whether we want to take back the state of Hip-Hop or pieces of our very own lives, the application of war paint is a necessary component of our heritage that must be preserved and applied if we desire to succeed. The album will be graced with some of the industry's most refined producers such as Ali Shaheed Muhammad, Pete Rock, Khrysis, !LLMiND, TheARE, Black Milk, Renee Nuvelle, and S1 to name a few.

In the meantime, the BLAQ-INK army continues to saturate the virtual realm with Chip Fu's past and current work and in turn attracting a new age group of followers. Chip's exclusive online release of "Love Me Sensi" accompanied by the official You Tube video attracted more than 157,000 unique hits in the first month in 2009. And despite the continued success Chip still maintains other life goals, such as pursing his degree in physical therapy and obtaining a second degree mastery in Reiki. In 2004 Chip was in a car crash where he walked away from the wreckage while one of the passenger's injuries left him paralyzed from the waist down. Chip, however, healed from his injuries and vowed to make a difference in the lives of those who may not be as fortunate. He is hopeful that his education and experience with patients will afford him the opportunity to work with Cancer patients who require physical therapy and mobility assistance.

As of now Chip's work continues as an artist, mentor and community champion, but above all he hopes that people take away the following from his life and his work. "I want to be remembered for my contributions to humanity through various mediums. Not just one-dimensional. Sure, many of us are duplicated and imitated in our own form of expression, but its only when we understand our personal purpose and reason for walking the planet that we in turn become untouchable. Fluid. Creative. That's me." 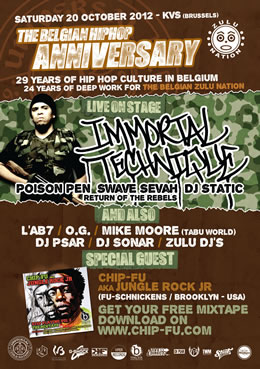